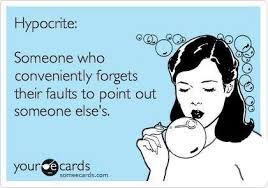 Hypocrisy, a noun defined by the dictionary as “The practice of claiming to have moral standards or beliefs to which one’s own behaviour does not conform, pretence, a hypocrite.” I am sure as we reviewed this sentence at least one person came to mind who we feel has been a hypocrite, and if we are totally honest and reflect on our own behaviour there may have been times, when our own words and actions were not congruent – this is called being hypocritical.

The old saying “Do as I say, not as I do,” is a great example. You probably heard this as a child growing up, and may even have said as an adult to your own children? But why is this phrase not appropriate? The most obvious reason, it promotes hypocrisy. The majority of parents will tell their children certain ways to behave, or not; certain things to do, or not. But the question is, do these same parents abide by their own advice?

So what is the problem with hypocrisy or being a hypocrite? To begin you are setting a poor example for others, you are not living your truth and you are compromising your beliefs and morals. When this occurs it makes people lose faith and respect in you. Some would describe hypocrisy as “two-faced honesty,” pointing out things in others that are clearly evident in themselves.

Let’s take a look at the 3 reasons why being a hypocrite can be seen as negative.

Take a moment and reflect on your communications over the past week, were there times that you were not congruent with your words? The truth is you will always know when you are being hypocritical as it will leave you feeling uneasy about your interactions.

Always remember your behaviours can be changed. The first step, as with everything is acknowledgement.

Be the positive change in your life™